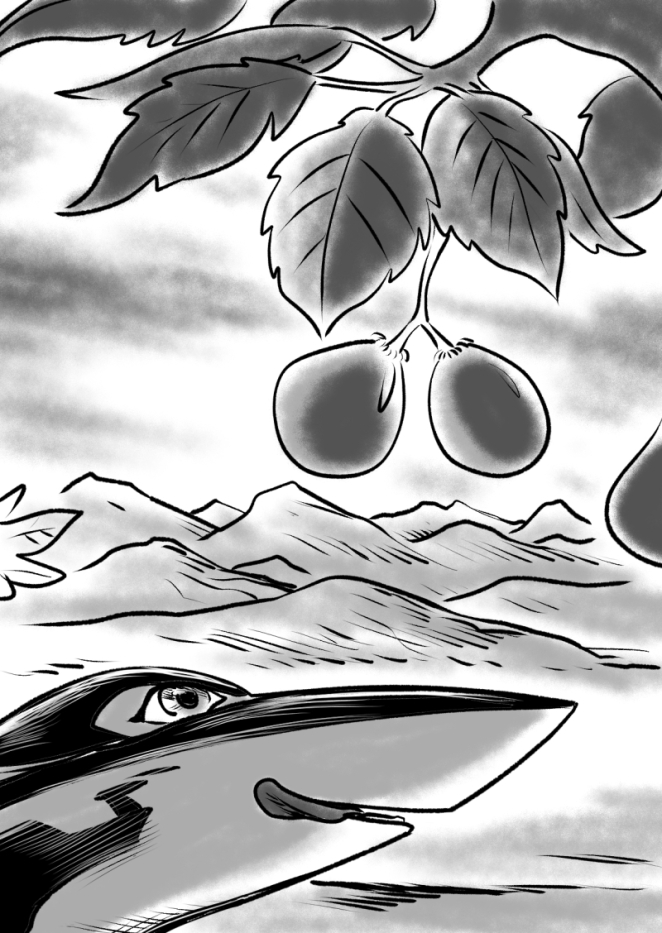 When I first looked down and took notice of you Anzia, you were six years old, looking up in anticipation at the ripening mulefruit that hung barely a meter above your nose. Mechanian aircraft have long had a love affair with this sweet, melon-sized fruit, but the holy sisters who cared for you regarded the trees as an attractive nuisance, for the fruit, high in sugars, sent children of all species careening around the orphanage halls and the yards outside in bursts of hyperactivity. It was only for their desert-hardiness, their erosion-control value and the cover they provided from sun and wind that they were kept at all. They were the basis of the precious greenbelt in which the Sisterhood of the Gold Moon had located their mission, with its chapel, hospital and orphanage. Around this, a village grew, with an inn, a few other shrines, and a rest stop for land-travelling pilgrims en route to the great shrine of Kieda. There was a small airstrip as well, where Sister Amiris took you and the two other aircraft children for your exercise, three times a week.

At other times, you and all the others were gathered in the great hall for your lessons. Master Delb came in from the foothills to teach you history and math. He sat before you all, with his long hair and beard all salt-and-pepper, skin tanned and weathered, clad in a rust-colored sarong and not much more. While the older children worked away on their assignments, the Master would school the young ones in the basics of arithmetic and introduce them to the known past of all the world in general and the kingdom of Tavora in particular, right down to which duchy their village resided in. He was able enough a teacher to keep six little humans, two taurcat cubs and four little mechanians engaged and generally on their best behavior, and he only had to correct you a few times… such as when the mulefruit were almost ripe and you couldn’t wait to get outside, shimmying in place and flicking ailerons, elevators and rudders in anticipation.

“Patience, Anzia.” he’d chide you gently. “The mulefruit aren’t going to run away on you.”

Of course, they didn’t…

Words, pictures and stories from a world of many races – human, alien and “machine”